Practice outside-the-box thinking with "Baba Is You"

I'm not sure if Baba is a rabbit or a dog or anything we know of at all.

But in the game "Baba Is You", on most levels Baba is YOU!

Which means that you can control Baba with your keyboard or game controller.

Baba Is You is a game with lots of levels. On a level, there can be different things, but Baba, a flag, walls and rocks are common. There also are texts. Texts can be pushed. When texts are combined into a meaning, that meaning, if valid, become a rule.

Like when the texts "ROCK",  "IS" and  "PUSH" is formed into the meaning ROCK IS PUSH.
Which means that Baba, or whatever you control for the moment, can push all rocks on the level.

Or WALL IS STOP
Which means that you cannot move past a wall or push anything on it.

FLAG IS WIN means that when you reach a flag, then you've finished the level.

Here's the first level, it's simple as can be.

The more levels you pass, the more different things and texts you will see. Quite often I've had to think really hard before solving a level (and since I didn't want to spend too much time in the game I've often peeked at parts of solutions on youtube). 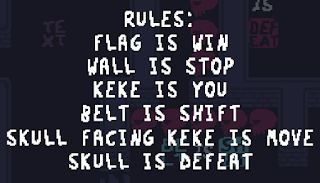 You play the game by pushing things around and pushing texts around to alter the rules of the level, until you can reach something that IS WIN.

I think you should try this game of you like logic and bending rules to your favor. There's no stress and a bit similar to coding. And I can promise you that some levels require skills in outside-the-box thinking!