Have you tested these types of retrospectives?

If you're favourite activity for a retrospective isn't described below, I'd love it if you describe it in a comment to the post! 😃

How:
Ask one question that each person can answer with a word or two.

How:
In small groups, discuss, reflect and describe the list of words in the list below. For example ,one pair of words per group. Focus on the first word, focus off the last word.

How:
Everyone reports anonymously his or her attitude toward the retrospective as one of the types in the list below.
The result is presented. If there is a prisoner or many vacationers that fact could be a topic for the retrospective.

Working agreements
Purpose:
Establish a set of behaviors that will support the team in having productive discussions. Establish that team members are responsible for monitoring their interactions. Provide candidates for day-to-day working agreements if the team doesn’t already have them.

How:
Team members work together to generate ideas for effective behaviors at work then choose five to seven agreements to guide team interactions or processes.

Activities to gather data
Gathering data creates a shared picture of what happened during the iteration, release, or project.

Timeline
Purpose:
Stimulate memories of what happened during the increment of work.

How:
Group members write down events that happened during the selected time period and want to share with the group. Each event is written on a separate paper and then placed on a timeline on a position that represents the time that the event took place.

Triple nickels
Can also be used in the Decide what to do phase.

Purpose:
Uncover important topics about the period the retrospective is held for. Can also be used for generating ideas.

How:
Each person writes down topics or ideas on a paper. Then everbody passes the paper to the neighbour that writes down his or her topics or ideas related to the ones that already are on the paper. Repeat until that papers are back where they started.
Read the ideas for the group and discuss. Examples of usable debrief questions
I think this activity has been named Triple nickels because a person that used it asked three debriefing questions which she wanted five answers to, like "What five things stand out for you about what you've read?" A nickel is five cents.

Color code dots
Purpose:
Used in conjunction with a timeline to gather and show data about the feelings experienced during the timeline period.

How:
Use different colored stickers to mark the papers that were written for the timeline earlier. The color of the stickers indicate the energy level the person had when doing things related to the thing described on the paper.
Investigate the result, for example, if a paper got lots of high energy stickers, how come? What factors made people feel that way?

Mad sad glad
Purpose:
Get the feeling facts out on the table.

How:
Each person writes a card for every event that happened during the period that made the person mad, sad or glad. Cluster cards that is related to the same event and analyse the clusters.

Locate strengths
Purpose:
Identify strengths so the team can build on them in the next iteration.

How:
Pair up and interview each other with a focus on what went well and factors around it.

Satisfaction histogram
Purpose:
Highlight how satisfied team members are with a focus area. Provide a visual picture of current status in a particular area to help the team have deeper discussions and analysis. Acknowledge differences in perspective among team members.

How:
Each person anonymously grades his/her satisfaction with a certain focus area. Read the answers and draw a histogram to make the data visible.
Focus area examples:

For a rather big team, that has a wide range of satisfaction for a topic, a histogram could look like the image below. 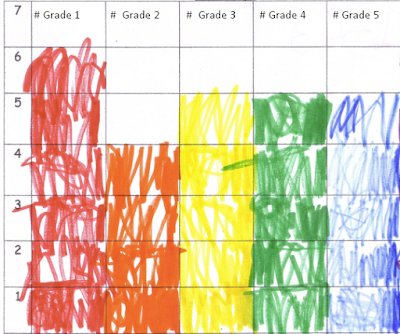 Team Radar
Purpose:
Help the team gauge how well they are doing on a variety of measures, such as, engineering practices, team values, or other processes.

How:
Each person grades (0-10) how well the team is performing for different factors. Present the average values in a diagram. Save it to be able to compare to the result next time doing the same activity. 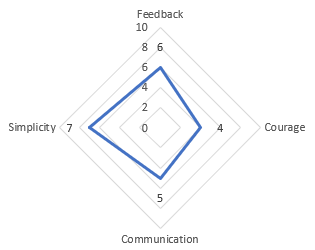 Like to like
Purpose:
Help team members recall their experiences during the iteration and hear that others may have perceived it differently.

How:
Like to like is a team work variant of the game Apples to apples. Each person writes cards with things to stop doing, things to keep doing and things to start doing. These cards are then used in the game, and the players will try to find the best match of their cards to another card presented by a player having the role as judge.
Discuss insights from the game afterwards.


More activities
I'll try to write another post about the remaining activities described in the book later on. I hope this post has given you a sketchy picture of a few activities you'd like to try and/or read more about.

Here's two links to other resources for retrospective activities.
http://retrospectivewiki.org