Portal site to blogs by municipality-politicians

During a period of less than a year I was an active municipality-politician with a place in the strategy committee of the City Council. It was an interesting time and I learned a lot about the politics of the municipality that I really hadn't had a clue about before. It was also a really frustrating time, feeling that I never had enough time to study the matters brought up in the committee that I should have an opinion about to be able to know how to vote. The majority of the municipality-politicians have to do their politic work at their free time and that was also the case for me.

As a software developer I'm used to find bits and parts of solutions to tasks I have to solve by searching the web. But in municipality politics I don't think it's common that you can find things by googling them. I wanted to find history about some of the matters, well, when there existed a history it was hidden in the heads of the politicians that had been in the game for quite a while. They sure wanted to talk about the past, but it is really time consuming to learn by finding people that have the knowledge and then have a chat about it. There probably exists lots of information in the archives too, but I'm not sure it would be any faster to find it there.

On the municipality home page you can at least find summonses and protocols in pdf-format for a few years back. The problem was that the content of the pdf-files was images of texts instead of normal, searchable, copy-and-paste-able text.

After experiencing the breadth of the matters dealt with in the committee, I finally understood that to have any constructive influence on the politics I would have to devote much more time for it than I had done so far. I wasn't up for that.

Anyway, my time as a politician made a small impact on information findability. I wrote a motion about the need to have the content of the summonses and protocols files in text format instead of images of text. The motion was approved and after that it became possible to find content in the files created afterwards by just googling some keywords! (... but sadly it just worked for a few months and then it was images of text again, probably caused by bad rooting of the new routines. Sometimes I try to remind them, but I usually have a hard time describing that the text really is images...)

So why did I tell you all this? Well, probably as an introduction to why I coded and published the site Blogging Municipality-Politicians. I want to make information regarding municipality-politics to be easier to find, and one way to do it I thought, was to create a portal site that lists all living blogs that are written by municipality-politicians. I didn't do much research beforehand, so I'm not sure there are that many blogs to add to the list, really. But it's worth a try and I probably will learn something along the way! :)

None of the people I've been in contact with about this has shown any interest at all in a site like this. So, I'll leave it abandoned.
Upplagd av Carl Björknäs kl. 22:30 Inga kommentarer:

Investigation of the Scrum Master role

I had a discussion with a person about the scrum master role, regarding what tasks are included in the role. He said it mainly was facilitation of meetings and to unburden the team from administrative tasks like making sure required program licenses got bought. I had a feeling a scrum master has much more on his responsibility, but wasn't quite sure of what, so the discussion ended there.

This is a small investigation of what the scrum master role includes to hopefully make that feeling of uncertainty go away.


So, after skimming some, reading some and analyzing some of the content that the links goes to this is my summary of the responsibilities of the scrum master. There could absolutely be more points and on a deeper level, but this suits my needs at the moment.

UPDATE 2017-01-23
I´m on a new job. Another company just beginning its trip on the path to agility. I´ve been researching more and I think I´ve found the best scrum master description so far.

This is the first part of the description of the scrum master role in the scrum primer:

The ScrumMaster helps the product group learn and apply Scrum to achieve business value. The ScrumMaster does whatever is in their power to help the Team, Product Owner and organization be successful. The ScrumMaster is not the manager of the Team members, nor are they a project manager, team lead, or team representative. Instead, the ScrumMaster serves the Team; he or she helps to remove impediments, protects the Team from outside interference, and helps the Team to adopt modern development practices. He or she educates, coaches and guides the Product Owner, Team and the rest of the organization in the skillful use of Scrum. The ScrumMaster is a coach and teacher. The ScrumMaster makes sure everyone (including the Product Owner, and those in management) understands the principles and practices of Scrum, and they help lead the organization through the often difficult change required to achieve success with agile development. Since Scrum makes visible many impediments and threats to the Team’s and Product Owner’s effectiveness, it is important to have an engaged ScrumMaster working energetically to help resolve those issues, or the Team or Product Owner will find it difficult to succeed. There should be a dedicated full-time ScrumMaster, although a smaller Team might have a team member play this role (carrying a lighter load of regular work when they do so). Great ScrumMasters can come from any background or discipline: Engineering, Design, Testing, Product Management, Project Management, or Quality Management.

It's almost 16 years now since Joel Spolsky wrote a blog post about "The Joel Test". I'm currently reading Dreaming in Code: Two Dozen Programmers, Three Years, 4,732 Bugs, and One Quest for Transcendent Software, a book that follows a failing project and that investigates why software projects can be so difficult to get done in time, on budget and with the right functionality. It references the Joel Test. Haven't had the time to analyze it much, but at a glance I like it and think it makes sense. I'm adding it to the blog so I don't lose it.

About two years ago I decided to learn the basics of SignalR by doing a small laboration. The laboration became this Reaction Time Game where the players try to be the fastest to click a button after it has changed color from yellow to green. It has a high score list and a chat. 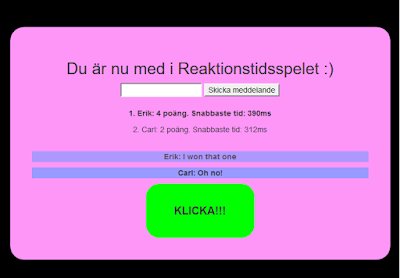 When playing on my smart phone, a Samsung S3, it is impossible to get an good honest reaction time registration. On the computer I get around 300 ms and on the phone around 800 ms, I'm not sure why this is the case. Maybe because of less CPU power, slower wifi or slow tap registration on the screen?

Of course @ordbajsarn had to hack it almost at once. The SignalR hub sends a signal to all clients when it's time for the button to change color. He changed the java script on his client to simulate a click on the button as soon as the color-change signal was received. This way he got really low reaction times registered on the server side. I guess I could guard against this by setting a limit on how many times in a row a client is allowed to have an unreasonable low reaction time. But the code is open source now and therefore a user can see whatever cheat guards are used. So, two questions from this laboration is: is it possible to have the source code open and still catch cheaters? How then?

Btw, the repository is here. 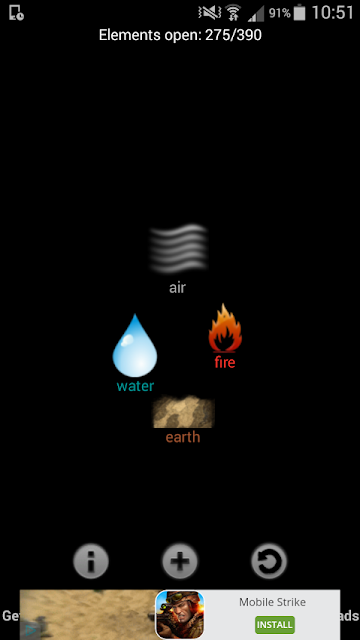 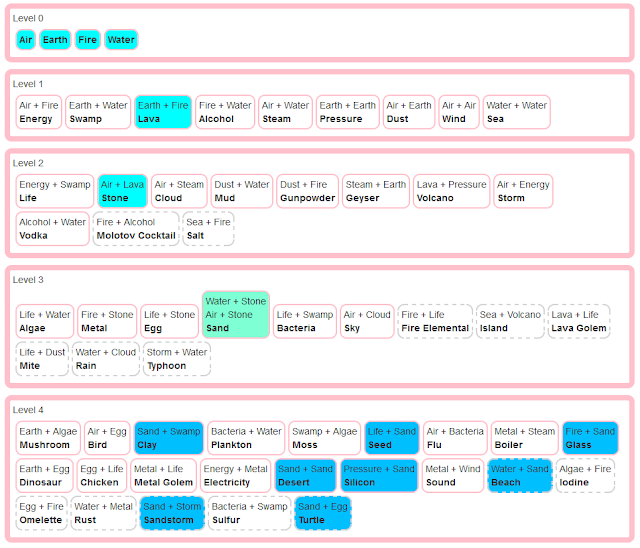 
I recently read Soft Skills: The software developer's life manual by John Sonmez. He really, really, really thinks it's good to have a blog when you're a software developer. So, well, I'll give it a try and hope I will get the inspiration to fill it with content. At least I will have a place to save things I want to have somewhere.

I found the book an easy read, with lots of career advices, many of them useful or worth considering. Skimming through the book now as I'm writing this, I notice that I already forgotten lots. Anyway, my main takeaway after the first reading was: "start a blog" and often that "any action is better than no action".
Upplagd av Carl Björknäs kl. 12:41 Inga kommentarer: